We are managing three permaculture projects in the Molo Region of Kenya.
One of them is in a town called Kisii Ndogo. This town is populated with people who were relocated from another region in Kenya that experienced extreme election violence in 2007.
The people relocated to Kisii Ndogo are extremely poor. They have had no means other than casual labour to support themselves.
One way to generate income was to strip the topsoil off and create bricks for resale, but this was an unsustainable business model. Once the soil is stripped, you cannot make any more clay bricks!
We started our project in a small area that was donated to the community from a place where clay bricks were made.
After fencing and re-building the soil with manure and nutrients, plants began to thrive. This provided food for the people who volunteered to work in the community garden plot.
Recently, the owner of the plot wanted it back. (Was this because a barren piece of land was now bursting with food?)
We had to find a new plot, for which we promised to provide the fencing, seeds, and initial start-up labour.
Another landowner wanted to rent us a small plot, but we said no. The community needed to step up and play their part. They did, and a new plot was provided.
The local town leader, a wonderful man called Zablon, has been a key player in maintaining the plants and ensuring the continuity of this amazing community garden.
We are proud of this work and of Zablon. He works closely with our ICO Farm Manager, Joash Barasa.
Look at the pictures below, showing the results of their/our efforts! 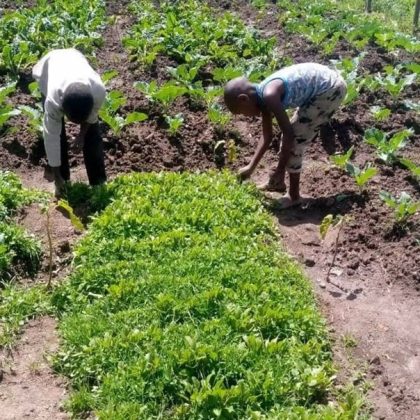