Our apologies for taking so long to update the blog!! So much has been happening in spite of the schools being closed and many families in the village dealing with COVID. This summer we began reviewing our strategic plan and realized very early that one of the major issues at La Casita was lack of adequate space. So, with advice and encouragement from our administrators Candelaria and Gregorio, we initiated a fundraising campaign that would support a Casita extension. We’ve been able to meet that goal and have raised enough to complete the building and also to buy some furnishings.

Things are definitely well underway. Gregorio, who is a really great administrator (husband to Candelaria, who is the main administrator), had decided that rather than turn the whole project over to the architect, it would be better to work with a local contractor in order to save money and also to have more flexibility to make improvements as the building went along. His projected start date was August 2nd. Shortly after making that decision, he came down a) with COVID, and b) following that, with dengue fever. We fully expected to put the project on hold for a while, but no. Gregorio is pretty fit and tough; he pulled himself through both of these afflictions and pronounced himself ready to go ahead. Since that time, the building has been underway, on budget and on schedule. It’s due to be completed by the end of November. 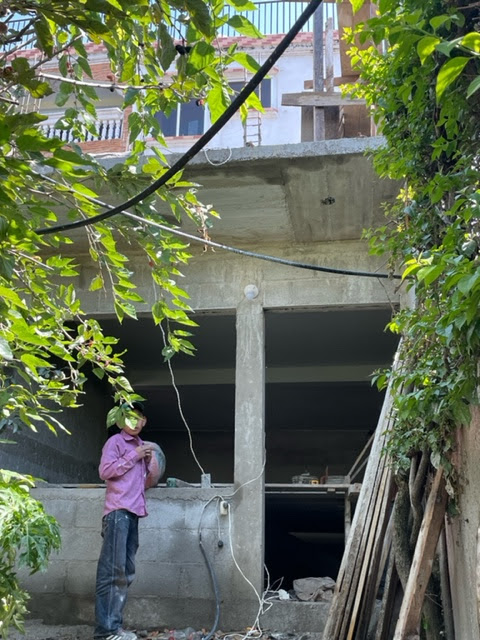 Our volunteer group had a Zoom meeting with Gregorio a couple of weeks ago, and learned that they are close to completing the finishing on the first floor, and at the same time are moving ahead on the top floor. One of the as-we-build improvements was that they decided to make the supports on both floors stronger, so that if we ever decide to build upward one more story, we can do that. As well, they decided to put the stairs on the outside of the building to save space, and have the bathroom accessible from the outside as well as the inside, so that kids from the main Casita can also access it, as well as the outside sink. 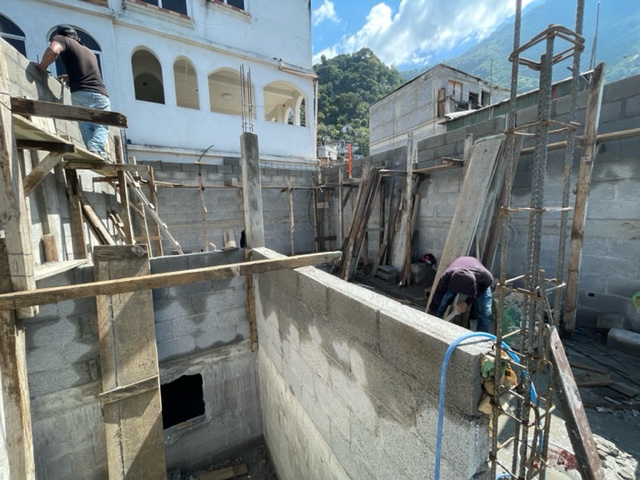 Meanwhile, while all this construction is going on at the back of the property, the programs continue in the Casita. School is once more closed due to COVID, and so there are piles of kids learning in groups, reading books and working on computers, as well as getting help with the assignments that they need to complete to pass their year.

So, we’re all feeling pretty excited about this new addition, which will give us lots more possibilities for programming. We really want to stress that the only way we were able to launch into this project was because of funding from our generous donors; without that, we wouldn’t have felt confident to move ahead with this building.

The next update we send you will probably include pictures of the completed extension, possibly furnished and maybe with kids learning, reading, using the computers. If this were a non-COVID year, a few of us would probably be going down to Guatemala for a grand opening. As it is, Kim, our volunteer who lives in San Antonio for part of each year, will be our sole representative. But we’re all raring to go down, as soon as it’s safe, and see the new building and how it’s being used.